Since 2019, Copley High School has been proud to offer the CyberPatriot program to students in grades 9-12. CyberPatriot, sponsored by Northrop Grumman, is the National Youth Cyber Education Program created by the Air Force Association with the goal of inspiring K-12 students to find careers in cybersecurity or other science, technology, engineering and mathematics (STEM) disciplines critical to our nation’s future.

At the core of the program is the National Youth Cyber Defense Competition, which is the nation’s largest cyber defense competition that puts middle school and high school students in charge of securing virtual networks. There are two rounds of competitions each year prior to the state round and semifinals.

The Copley teams competed in their second competition round on Nov. 13 and with their cumulative scores from rounds one and two, placed remarkably high in the state. Out of around 48 teams competing in Ohio, Copley’s four teams ranked in first, sixth, eleventh and eighteenth place.

On Dec. 11, the teams participated in the state competition and two teams received the highest state-level awards. Team 192.168.675:309 — Tristin Curtis, Max Zaher, Tyler Rojas, Aidan Marias and Bodhi Woll — received the second-place state award, while team Another Admin Bites the Dust — Michael Wachs, Tyler Allen, Ryan Towell, Henry Foster and Treson Mariotti — received the first-place state award and are the only Ohio team in the Platinum tier to be advancing to the semi-finals.

To prepare for this season, CyberPatriot coach Anthony Schulmeister separated the students into two groups; the new kids and the veterans. This gave Anthony more time to get the new students up to speed on the security basics of Windows 10, Windows Server and Linux, while the veteran students can focus on areas they feel they specifically need to target. All in all, the entire group collaborates effectively and they’ve managed to forge friendships outside of the club, as well.

“The teams really work well together and know what their strengths and weaknesses are,” said Schulmeister. “They get together outside of school and talk over their game plans for the competitions and write checklists and notes.”

The camaraderie between many of the students is also a major reason the team has grown in size over the years. Tyler Allen recruited several teammates, while others heard about it through friends and acquaintances, or simply noticed how much fun the group was having and wanted to get involved.

Through their involvement in the program, students learn about persistence, problem solving, critical thinking and how to work under stress.

“During competitions, things get stressful, but you learn how to work under stress,” said sophomore Aidan Marias. “A lot starts piling on, but you have to keep going.”

Along with the hard skills they develop, like learning about coding, cybersecurity and cyber forensics, they also develop soft skills by communicating and working together toward a common goal.

Beyond just serving as a fun and educational after-school activity, participating in CyberPatriot has also inspired several students to look into STEM careers.

“CyberPatriot has greatly changed the way my life was headed and made me want to focus on cybersecurity and do as much as I can within this field,” said Allen. “I would not be where I am today without it.”

For some, like sophomore Bodhi Woll, CyberPatriot has provided him with a completely different career path than what he was previously interested in pursuing. Now, instead of becoming a doctor or a veterinarian, Bodhi is interested in computer networking and programming and would like to pursue a career in IT.

Similarly, senior Chip Nielson now wants to go into IT as a career, after pivoting from an English and journalism track.

For other students, like Michael Wachs and Harrison Rothschild, CyberPatriot has provided additional clarity and a deeper interest in fields that already appealed to them.

“Before I started CyberPatriot, I knew I wanted to do something with tech, but I didn’t know where to start,” said Wachs. “Now, I want to follow this path and learn how to keep internet servers safe. It is something I enjoy doing and it’ll be a great way to get into college.”

Adds Rothschild, “I tried to find a way to include my passion for technology that also had to do with hands-on building, and I discovered the field of biomedical engineering, which combines both worlds.”

Junior Ben Allar now feels as though he has multiple options for what he’d like to do for the rest of his life and is grateful to CyberPatriot for giving him different perspectives when it comes to potential careers.

Even for those who are just participating as a creative outlet, CyberPatriot is a worthwhile, enriching after-school activity that exposes students to multiple technology areas and helps them learn how to collaborate and work together as a team.

We’re sending good vibes to our CyberPatriot teams and wishing them the best as they prepare for semi-finals!

For more information on joining this program, contact Anthony Schulmeister, 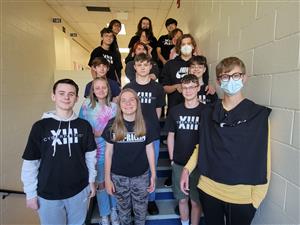